Taking a leap into 90s arcade territory, Hotshot Racing pulls influences from the likes of Virtua Racing and Ridge Racer, landing in a fairly sweet spot that offers fast, enjoyable racing with the added bonus of split screen action for racing against others. I teamed up with my local 8 year old (that’s my son, not a random kid who was waiting for the bus) to give this a run out and see what it had to offer.

When I first fired this up I wasn’t sure quite how impressed I was. Dragging a car round a corner felt laboured, and opponents would use any opportunity to punt me into a wall. It took a while, and some intervention from a younger gamer, to make me realise how to fix both of those things – drifting, and being a bastard back to them. Suddenly everything made more sense, and my ropey early impressions turned round quite quickly. I was trying to treat this like a proper racing game, like a low-polygon version of Gran Turismo, despite all clues suggesting that was a stupid idea. The music is fresh from a sweaty 90s arcade, the over-excited voiceovers sounded like they should be echoing out into a seaside promenade, it all points to this being a fast, brutal racer with nothing beyond a 3 minute concentration span needed.

Once that clicks, Hotshot racing is a lot of fun. Choosing from a range of drivers and vehicles, you’ll take to a range of tracks with varying amounts of twistiness to drift, boost and bash your way around a few laps of chaos. There’s some major rubber banding going on here, meaning that you won’t be building up a huge lead any time soon – this wants to keep things frantic, to have you always nervously looking behind you, trying desperately hard to keep a few inches between yourself and the barrier in case you crash and lose 7 places all in one corner. It keeps the pulse up that’s for sure, and makes for some intense racing. Later on in the various Grand Prix options things get very tough very quickly, and only the best use of drifting and boost (earned by drifting, for what it’s worth) will get you rover the line in front of the chasing pack. 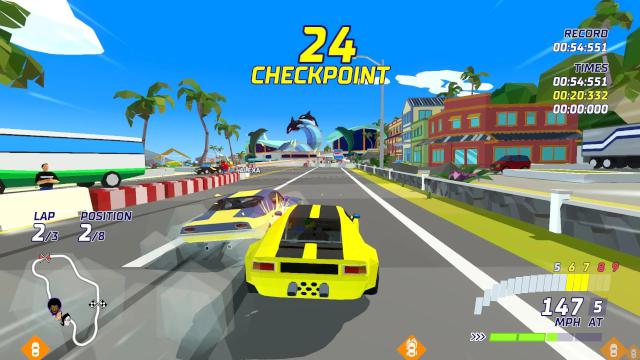 Split screen works nicely, letting you use a single joy-con controller easily, making this a great title to play on the go or with a couple of others at home. There’s a good availability of options from the get-go as well, so you don’t need to play for hours to unlock tracks you want to use with friends or family. The police chase mode is especially fun in multiplayer, pitching a team of robbers against some police cars in a Chase HQ style event. Police need to ram the robbers to drop their health, while the robbers try to survive and reach checkpoints first to earn more money. Take one hit too many and a robber instantly joins the police, meaning that as the race goes on there are more police chasing fewer robbers. Intense.

It all adds up to a fun, fast and well made arcade racer. I’d question the longevity of this a bit; while there are various things to unlock and lots of characters I’m not feeling myself desperate to jump back on and have more races unless my son asks me to, but in short bursts this is a really enjoyable racer with some super fast racing and an added dose of violent ramming for good measure. Very much worth a look if you’re on the lookout for a decent family racer.