‘They don’t make them like this any more.’ This seems to me what the developers may have been thinking as they embarked on side-scrolling brawler, 9 Monkeys of the Shaolin. Aside from an awesome title, it’s a reasonable if repetitive smash ‘em up.

As a mere fisherman, your village is invaded by pirates and your family killed. Of course, you elect to do what any good fisherman would do – set out on a journey of vengeance to kill them all. But of course! To be fair, you don’t really need to know much about the story in a game like this – there are enemies that need punching, and you are good at two things, punching stuff and… no it’s pretty much just punching stuff.

Combat in 9 Monkeys is super simple. Kick, hit with a big stick, evade (which also doubles as a kick) are your primary commands. You can modify these a bit later by holding to power them up, or pushing a trigger to turn them into super moves at the expensive of your Qi bar (which builds up from smashing people). It feels quick, responsive and brutal. But very quickly, you’ve seen it all. 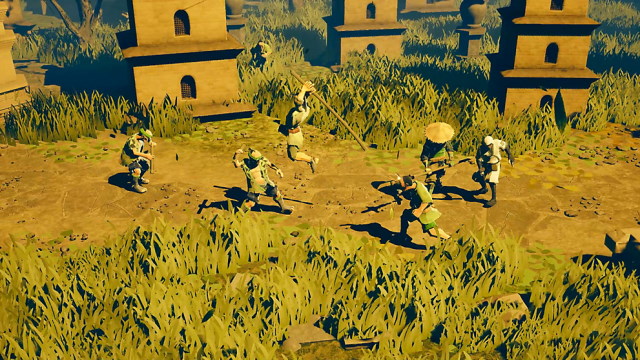 Blocking, or rather parrying is essential. However, I mostly found that this is used to dispatch archers who sit ‘behind the scenes’ so it becomes the only way to kill them. Otherwise the rest of the enemies I am literally just hammering the buttons until they stop being there. After a few levels, I got pretty bored, despite some different mechanics to spice things up – such as a couple of genuinely interesting boss battles, fire traps in the levels to lure enemies in and other environmental obstacles.

The animation was the first thing that caught my eye about 9 Monkeys. It’s very fluid and feels brutal enough – the hits pack a punch. The characters are all chunky looking and have a sort of cell-shaded kind of feel. Something that is really odd though, is that whilst running, the animation sort of trips and has a frame of your character standing still. It’s almost like a miskeyed frame, it happens frequently and really breaks the flow of the game.

The cool-looking visuals roll over to the levels, which all look pretty nice. Sadly, after the first few, the enemies that you encounter are reskins of themselves. With the repetitive combat, repetitive enemies, something more is really needed to keep you going. There are some upgradable weapons, necklaces (which give buffs) and shoes (speed bonuses etc.) which add a nice little layer of customisation, but it could be more.

That really sums up 9 Monkeys for me. “It could be more”. The base foundations are decent – it’s fun, to a point. But it quickly gets repetitive, you feel like you’ve seen everything rather quickly, and it even got a bit boring. Literally just hitting the same button over and over, there isn’t enough depth here. And that’s a shame.