If we’re handing out awards for “deceptively sim-like game of the year” then we can probably name Art of Rally as one of the likely candidates. Watching video footage of Art of Rally would have you believe that it’s a light-hearted casual rally game, giving you point to point races alongside the option to drive wherever you want to explore, jump around the place and generally mess about. But the moment you strap yourself into your first rally car and hit the road, you’ll quickly find out that this is no arcade racer – you’ll be needing to channel your innermost Colin McRae to nail the stages.

Those of you who like to try out the less famous racing games might remember Absolute Drift, another game from these developers that looked awesome with its simple, low-coloured graphics but had the incredibly challenging and rewarding handling tucked away beneath. Art of Rally carries the same ideas, with the simple almost cartoon-like graphics working together with the kind of handling you’d associate more with DiRT Rally or the WRC games. Starting off with a brief tutorial the main game kicks in by letting you drive around the countryside, either practising on the roads or just roaring through the trees, launching yourself off grassy banks and generally hooning around the countryside.

From this point on, you’re pretty much on your own to work your way up through the various vehicle classes, taking part in individual stages or entire rally events. The initial cars might feel a little on the slower side, but they provide vital training for when the power gets ramped up and the difficult increases along with it. Before too long you’ll be wrestling your cars sideways round corners, leaping over jumps in the road and sliding millimetres from every rock, tree, spectator and cliff face daring to get in your way. You’ll also be hitting a lot of those things for quite some time, at least until your brain realises that braking and preparing properly for a corner is vitally important and can’t be a last-minute decision. 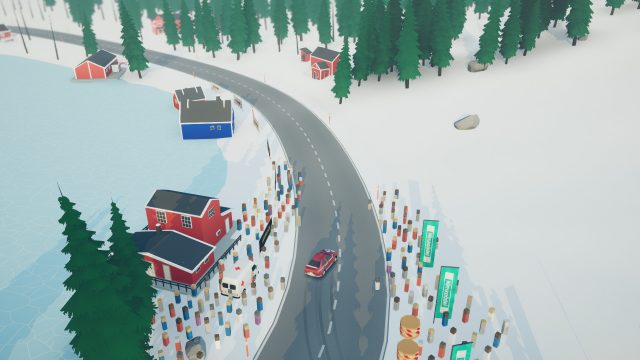 Along with the impressive range of cars (unlicensed cars I should add, although the names used are pretty cool – who doesn’t want to drive the Turbo Brick?) you’ll also enjoy several different locations, each with their own challenges and weather to worry about. You’ll race along gravel and mud, stretches of tarmac and stages covered in lethal snow and ice. It’s not just the weather though, with the pink blossom lining Japanese stages, and snowy banks lining the Norwegian stages giving you a really unique feel for each location on offer.

And what better way to enjoy the various car models and amazing locations than with a flexible and well-made photo mode? At any point you can pause the action and point the camera pretty much anywhere you like. Capture your best jumps, Scandinavian flicks and power slides from pretty much any angle you fancy and share them instantly on Steam in the usual way. It’s not uncommon to have photo modes nowadays. but it’s a great addition on a game with this kind of visual flair and will add a sizeable amount of time onto what you thought was going to be a quick game.

So obviously, Art of Rally is an easy recommendation. If I wanted to pick holes I could argue that at times the handling feels a little too slidey, with grip levels often seeming lower than you’d expect even for a rally game, but it’s something you can get accustomed to quite quickly and adapt your usual driving style to match the conditions and handling. But as racing games go, this is right up there with the best, and one that should give you plenty of challenge and longevity.