Lost Ember begins with you, a wolf, being asked by a spirit for some help finding its way. You agree, and it’s quickly discovered that you are a Lost Ember – a person who was not permitted access to the City of Light after dying. In response to your helping the spirit, he agrees to help you understand why.

Lost Ember is really a game about exploration, nature and spiritualism. It’s calming – landscapes are sweeping and dotted with all sorts of scenic beauties. It looks a bit low-res on Switch, which actually added to the charm for me a little bit, reminding me of that first scene in Ocarina where Link wakes and walks out into the forest – blurriness and all.

The key gameplay hook here is, aside from collecting lots of bits and pieces as you go (there are a lot to collect), teleporting into other animals to possess them. Your first introduction to this is being able to possess a wombat. A wombat is kind of rubbish, small and slow – nothing on your wolf, but they can squeeze through small gaps. As I discovered much to my annoyance as I ran a fair distance as a wolf, only to run back, and then run there again at wombat speed. 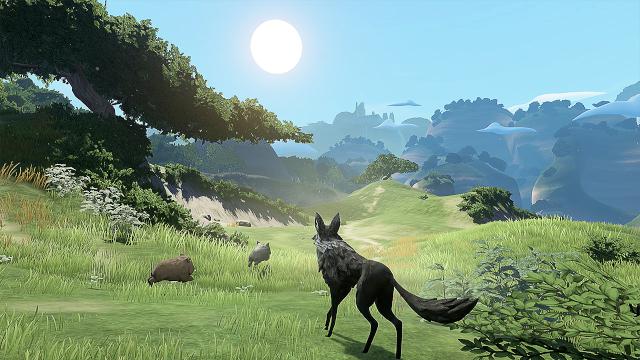 It’s ok though – Lost Ember is very much about the journey, spiritual and literal. Possessions as you go continue to be interesting – ducks can swim, wolves can’t, so there is a light puzzle dynamic but you’re never really tested. It’s mostly about just making your way through and letting things unfold. You can’t die or get into combat, although not all animals are especially keen on the wolf, none try to start a fight.

I particularly liked the voice work. Recorded very cleanly, and crisply, it’s elevated over just a character speaking and is very much it’s own role (this is hard to explain, but I feel similar playing Darkest Dungeon). The score is very suitable also, I often found myself stopping to just look and listen.

Sadly a few collision issues ruined my fun from time to time. Getting stuck on the scenery is the most common, and your enjoyment with Lost Ember is going to ultimately be determined by how hard-fixed you are on an adrenaline-fuelled experience (this isn’t) or how put off you are by minor bits (this has a fair few). For what it’s worth, I enjoyed it.